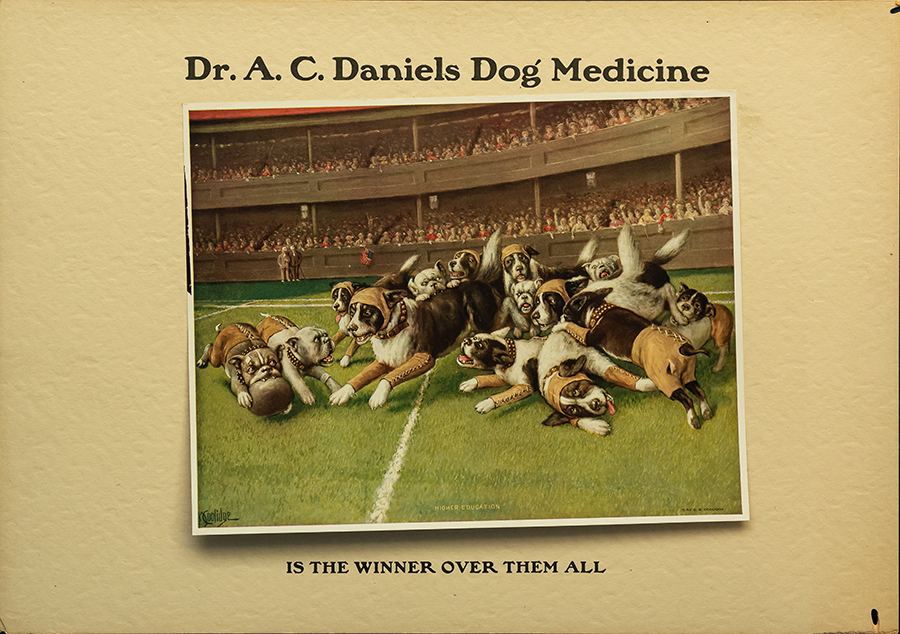 “Window Cards” are an advertising display genre that consists of a heavy cardboard backboard that is printed with company information and, typically a slogan to catch your eye.  The center portion of the window card has a generic image, printed on paper that is then glued onto the center of the card.  In this case, the backboard reads “Dr. A C. Daniels Dog Medicine / IS THE WINNER OVER THEM ALL.  20”x 14”.  Simply said, THIS CARD IS FANTASTIC!!  The image is captioned, “Higher Education” and has a team of Bulldogs playing football against a team of what today would look like Border Collies.  The Bulldogs are wearing leather pants and the Collie’s leather helmets.  A Bulldog with the football in his mouth is going around right end headed for the goal line with a blocker in front.  The defensive end Collie is attempting to cut the runner off, but he has one Bulldog biting him in the side and another about to bite him from his blind side.  Another Collie, in the end zone is on his side with one Bulldog attached to this foot and other biting his side.  His tongue is out, and his eyes are rolled up, like he has had enough.  Those Bulldogs are a mean bunch.  This is the ONLY example of this image and window card I have ever seen or heard about.  In my mind, it is arguably the BEST Dr. Daniels’ window card of all time and probably unique.  There are two bug holes along the right edge of the cardboard that are easily framed out and the image has been glued to the backboard at an angle.  That’s it.  The only possible comparative I could find was a Daniels’ window card of dogs playing baseball that was sold in a Morford Advertising Auction in 2000 that brought $925.  That is the record for a Daniels’ window card. I have sold several desirable cards in the $300-700 range.  My estimate is $750-$1500 but I will be sorely disappointed if this outstanding card does not set a new record.  SOLD WITHOUT RESERVE.