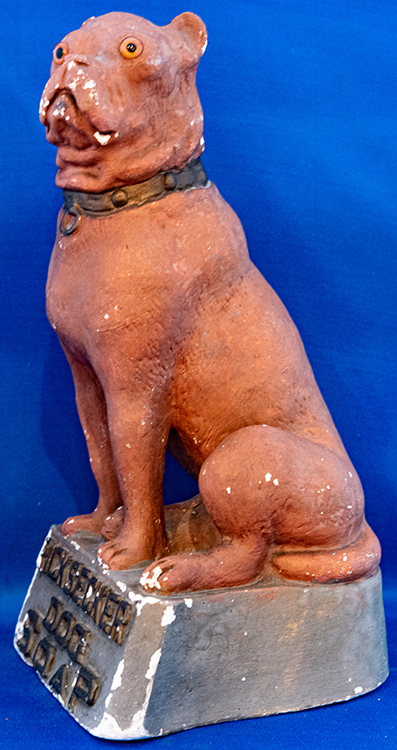 Wonderful folk art statue of a Bulldog style dog having a short snout and cropped ears.  This was a point of purchase display piece, sitting on the counter, of a store selling Ricksecker Dog Soap.  The dog is made of chalk.  The dog has glass eyes and would date to about 1890-1910.  Most glass eyes were made in Germany and imported for toys and dolls.  At the start of World War I, the importation stopped with the war with Germany.  The paint looks original and has appropriate wear patterns.  He has minor wear along the edges of the base, but no significant damage.  He is quite impressive and for over 100 years of age he is holding up very well indeed.  10 ¼”x 5”x 5”.  Three-dimensional advertising figures for veterinary products are very rare and as such, add a great deal to any collection.  Imagine this fellow among a nice collection of dog soaps, what a display he would make.  A Ricksecker Dog Soap statue was included in the museum exhibition, PETS IN AMERICA, which traveled to various museums for over three years.  So, he is indeed, museum quality!!  Estimated at $1000-2000 with an opening bid of $300.